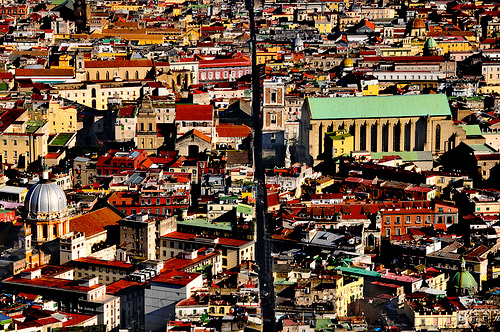 “…with the Vesuvius there, almost on the doorstep and Capri in the blue distant of a soundly sleep“.

With these words ends the poem dedicated to Napoli by the sevillan poet Adriano del Valle. With the Mount Vesuvius nextdoor, Napoli wake up from its bluish night and organize the city-life everyday ; the smell and color will surprise the traveler, especially the port that transmit the true essence of the Italian coast of Campania.

Making a call at Compania, the region of 5 World Heritage

Arriving by cruise at Napoli is the best way to get a panoramic view of the colorful city that will conquer us forever. Bordered by the islands of Ischia, Capri and Procida, Campania counts among its treasures with 5 elements ranked as World Heritage Site by UNESCO. Thus, besides the city of Naples, the Amalfi coast, the Royal Palace of Caserta ; Pompeii, Herculaneum and Paestum and the National Park of Cilento y del Vallo Diano hold this great distinction.

When the sea brings you to Napoli you just have to let yourself go by instinct traveler and by the charm of the city that hoards this amount of monument and wealth resulting from hits cultural heritage. Napoli has over 450 churches and religious buildings. Among them is the Duomo di Santa María Assunta, dating from the fourth century and houses the oldest baptistery of the Occident. The Neapolitan cathedral also houses the Treasury Chapel, with its famous bust of San Gennaro and his relic. They say the blood contents in the relic liquefies the anniversary of the saint’s death. This “miracle” causes great devotion among Napolitans for their patron saint in addition to the multitude of processions. In addition to the churches of San Gregorio Armeno and Gesu Nuovo, both jewels of architecture and religious art that have become a claim for lovers of sacred art, among its secrets Napoli has vast catacombs of San Gennaro, from II century ; as well as the imposing 173 meters high church of San Francesco di Paola in Piazza del Plebiscito- the authentic cultural epicenter of the city- or the church of San Lorenzo Maggiore, which houses within its walls the tomb of Catherine of Austria. Among the most recommended visits, there is the Amphitheatre Flavio, which they say is largest in Italy .

Napoli and its neighborhood: Vomero and Español

But besides the most emblematic monuments of the Neapolitan town, and visit nearby locations such as Capri, Mount Vesuvius and Pompeii, and comply with local superstitions like walking with your eyes closed from the Royal Palace to the two statues located in the same square place; or tour the beautiful shopping street in the Gallería Umberto I and buy an Italian souvenir, we recommend if you really want to know Napoli is to devote few hours to know the most emblematic areas of the city. The real epicenter of life of the capital of Campania. Thus, we can take the funicular to Vomero neighborhood. From this amazing middle-class neighborhood we can take one of the most beautiful pictures of the trip: lgolf view from the Monasterio Cartujo de San Martino. The nerve center is the Piazza Vanvitelli, you should walk through it. Also the medieval castle of San Telmo is a must stop in this part of the city. A contrario, la Vía Toledo and el Barrio Español de Napoli offer us a totaly opposit view, the clutter, the chaotic charm and the jovial Napoli live in the neighborhood whose main artery named the city in honor of Pedro Alvarez de Toledo, viceroy of Napoli. It is located near the port and heading to castel Novo. It is the true underground Napoli, consisting of galleries and hiding the best kept secrets in town.

You should not leave Napoli without walking around Piazza de Dante. You can reach it through one of the arteries built by the Greeks, the Decumanus, today called Via del Tribunali. The shopping arcade in the vicinity, Prince of Naples Gallery, is also worth a stop for shopping practice.

Napoli: the birthplace of pizza and delicious wine

And of course, if you want to have the honor of tasting an authentic Neapolitan pizza you must retrace our steps to the Barrio Español by “Via Chaia” to “Pizzeria Brandi”.  It is said that the Pizza Margarita was created in this restaurant in honor of Queen Margarita de Saboya. They said the true napolitan pizza is three different type: la marinara, la margarita, and the margarita extra –with cheese búfala-. You should take a taste. The scale of the cruise in Naples is also a wine tourism destination that allows testing quality wines, like those made from Aglianico, the best dark-skinned grape of southern Italy, as Taurasi DOCG wines, which are harvested whn it start to snow. Also, are famous and delicious wine DOCG Greco di Tufo and Fiano di Avellino. All can be taste if you choose to reach Naples by sea and leave the napolitan dream.